A day out at CHSI Stitches in Birmingham 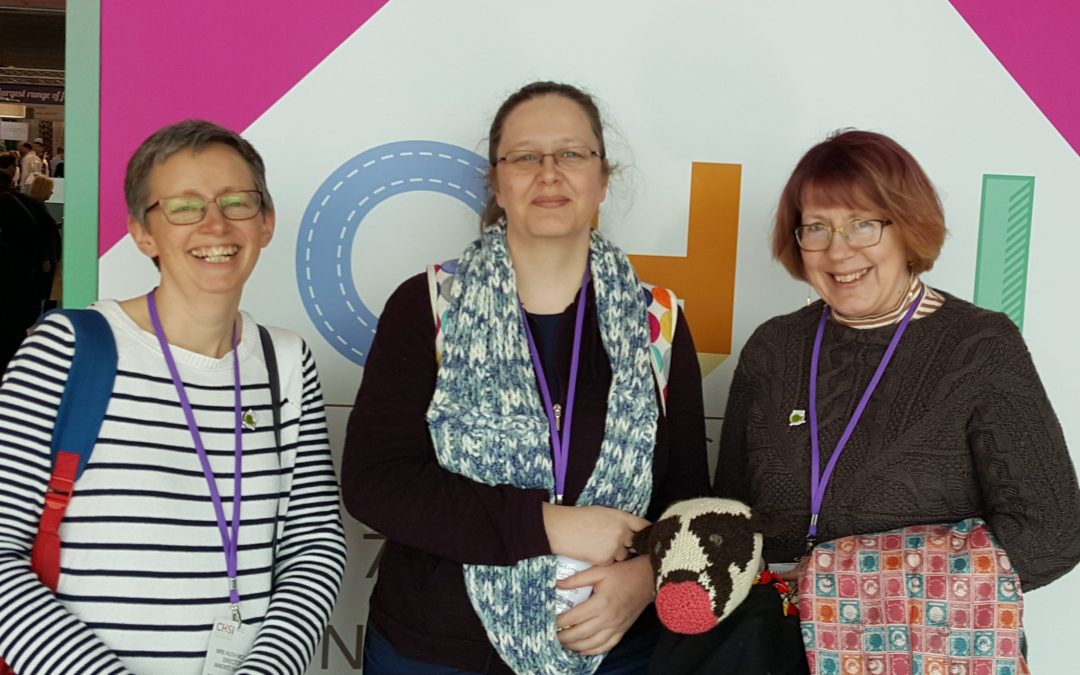 Back in March, Ruth and Jenny, the lovely owners of Ammonite Yarns, kindly let me tag along to their annual trip to CHSI Stitches, a craft show which is only open to professionals. Although it was a bit painful to have to be at Jenny’s house in Pontyclun at 8 a.m. on a Sunday, I knew we were going to have a lovely day ahead and that it was worth it.

We had a rather uneventful two-hour drive to the NEC in Birmingham, Ruth and Jenny being busy knitting (sadly, I couldn’t do any crochet, as I get car sick very easily). 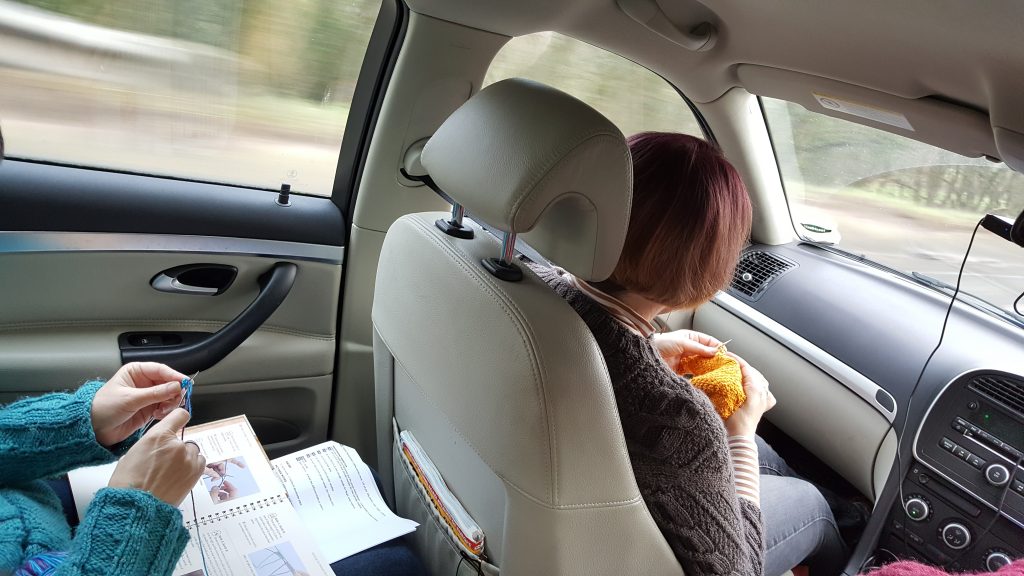 I had often heard of this venue but because I had never actually been there, I hadn’t realised how big a place it is! I had no idea that several events could be happening there at the same time. The Shooting Show and the MODA fashion show were also happening that weekend, so it was quite funny, on the shuttle bus between the car park and the halls, to try to guess who was going to what (in case you are wondering : the hunters were the easiest ones to spot!).

We collected our badges (mine said “Crochet Specialist”, which has a nice ring to it, don’t you think?) then headed straight to the cafe area to find a spot for Greg, Jenny’s husband (who had driven us up to the NEC), as he would be staying there holding a space for us for breaks and lunch time.

We could see the West Yorkshire Spinners stand from where we were sitting, so that’s where we headed first! Out of all the stands that we went to that day, I think it was the most beautiful one. It featured a different dominant colour and yarn on each wall, which was very appealing. I was also particularly fond of the tables that had their central leg wrapped with roving in delicious colours (yes, I had to stroke one of them).

It was fantastic to discover the exciting new yarn ranges that this British company had planned for the spring-summer season, particularly the ColourLab 100% wool DK yarn which I recently started working with and I absolutely adore. Ruth and Jenny were also excited to meet the famous Christine Perry, aka Winwick Mum, who is known for being the goddess of knitted socks in the UK. 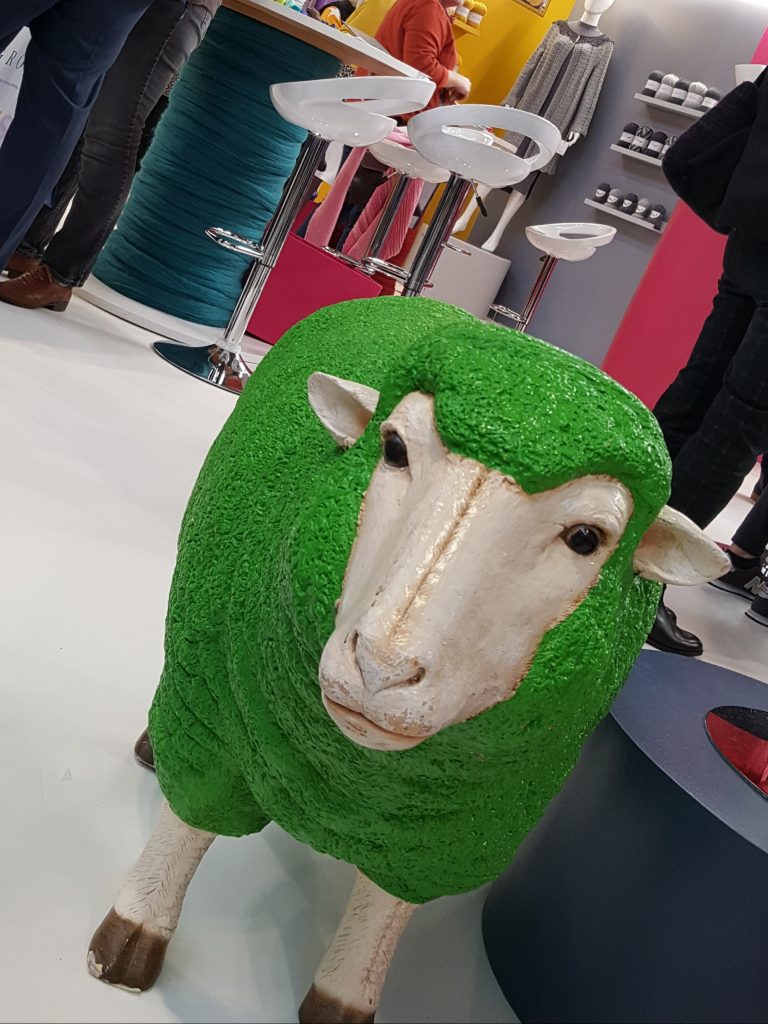 After a little break, we visited the Katia stall, where I had a lot of fun holding up a giant shade card for Ruth and Jenny to take their pick, and we went to the Stylecraft stall, where we had a lovely chat with Nick the rep who talked us through the new yarns and patterns.

We also talked to someone from Creative World of Crafts, who showed us the exciting collaboration between Caron Yarns and Pantone, which results in gorgeous packs 5 of mini-skeins of coordinating colours (great solution to take the guesswork out of mixing and matching different tones to create something pretty!) and we popped over to the Novita stall, where we discovered Moomins yarns and patterns – too cute!

You may have noticed that most yarn brands in the UK offer a lot of more knitting patterns than crochet patterns (when I visited the Sirdar warehouse last year, I was told that only about 10% of Sirdar patterns were for crochet). So, as “crochet specialist”, my job on pretty much every stall was to ask “what about crochet patterns?”, so that we had a more comprehensive view of what was on offer.

Later on, while Ruth and Jenny were having a chat with the people from Rowan, I wandered off to the GMC stall, which had so many books! As a result, my wishlist of crochet books has lengthened significantly, and now includes some Vanessa Mooncie books, Michelle Robinson’s book about Tunisian crochet, Emma Varnam’s Crochet Succulents book and a weaving book by Anne Weil.

I must not forget to tell you that we had a very special guest for this day trip: Prudence the prototype knitted cow! She was designed and knitted by Jenny as part of the Cows on Tour initiative. 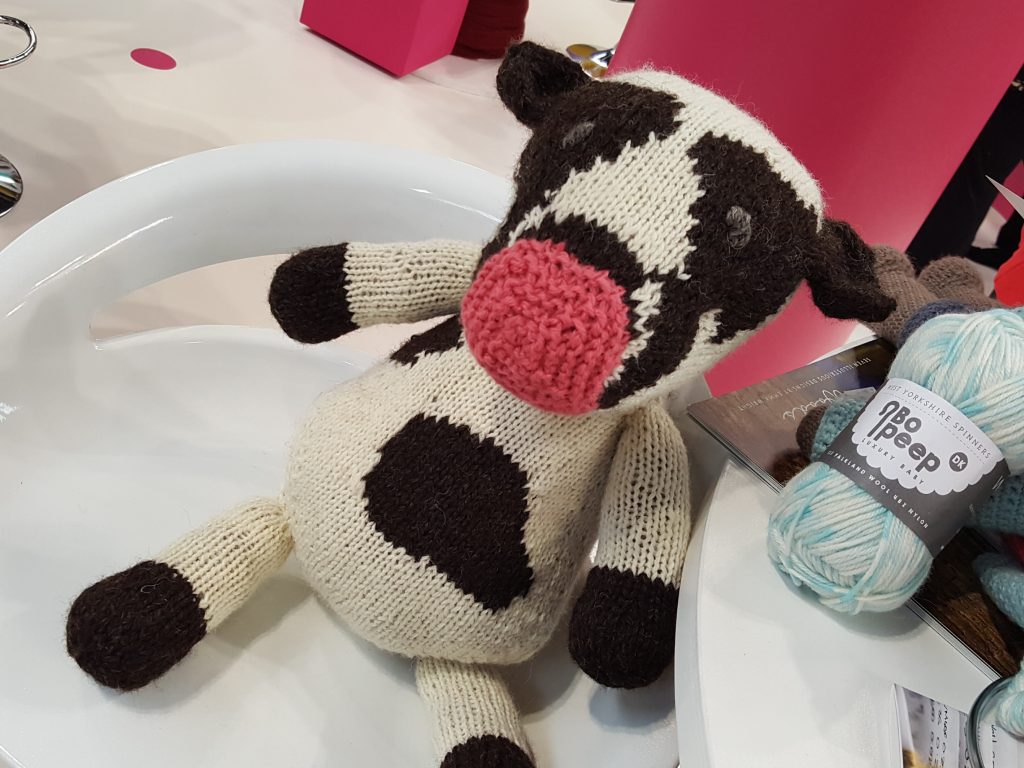 But what is Cows on Tour, I hear you ask! It’s a group of Welsh farmers who are committed to educating the younger generation about where their food actually comes from (i.e. not simply from the supermarket shelves). These farmers need help from knitters to create educational tools, like knitted cows, to engage with children in schools as they explain what farmers do, their role in our food chain and what they produce.

So we took Prudence along with us and while Ruth and Jenny were talking about serious stuff like yarn orders and payment terms, I was busy taking pictures of Prudence with her many new yarny friends on the various stalls. 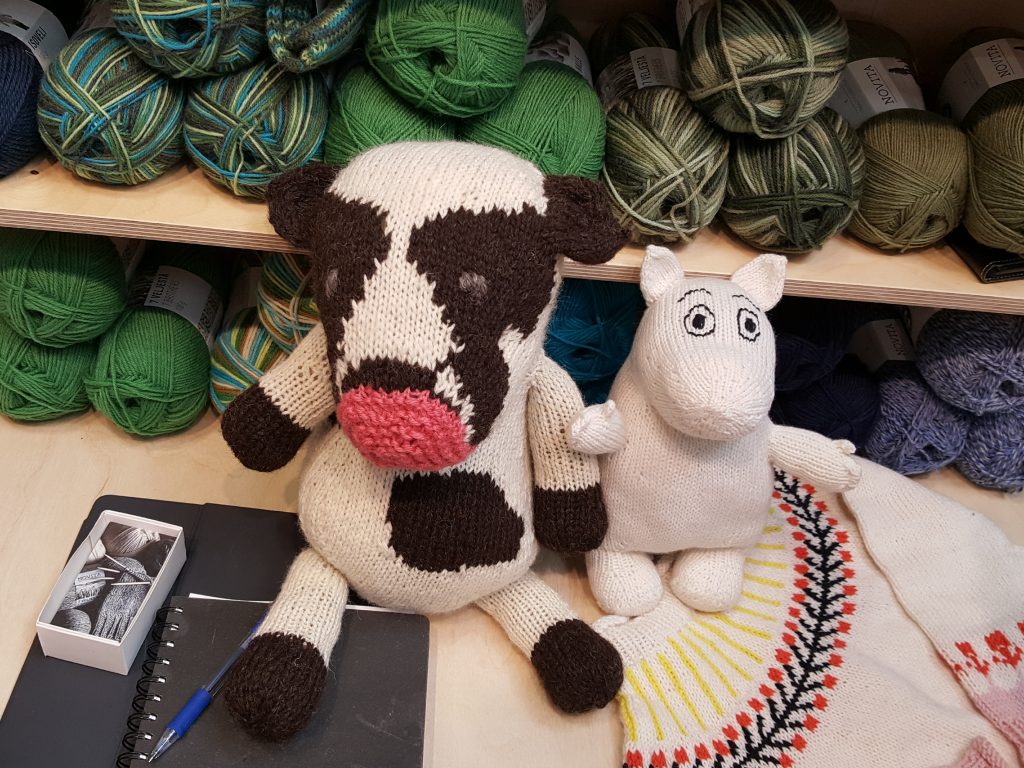 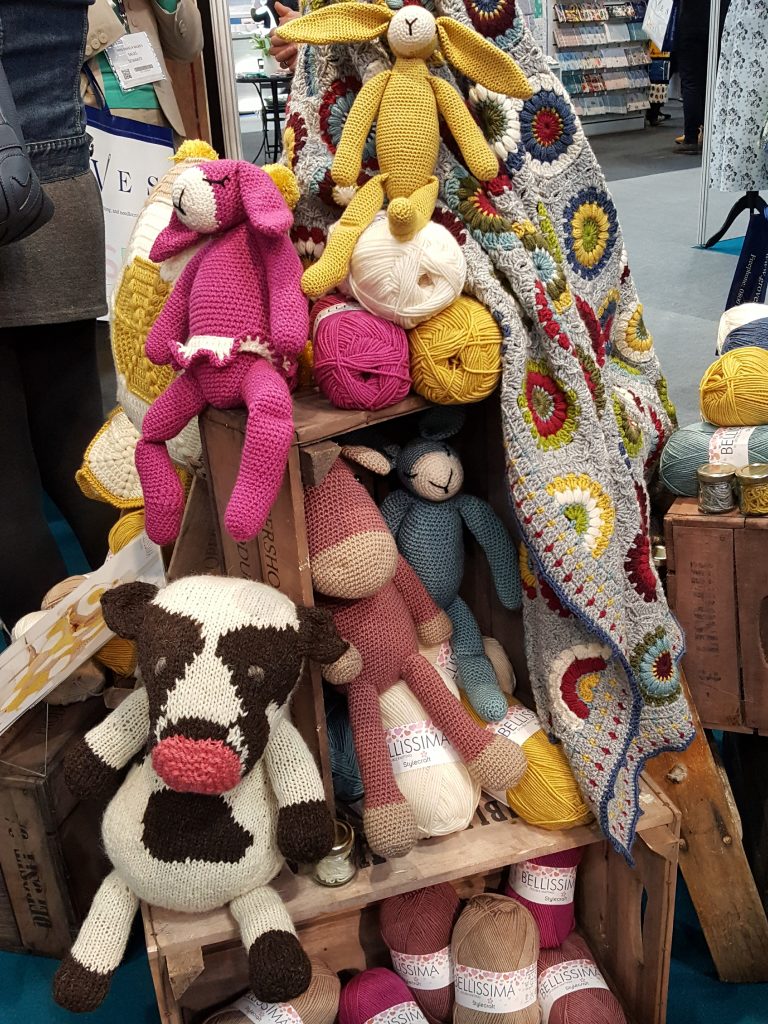 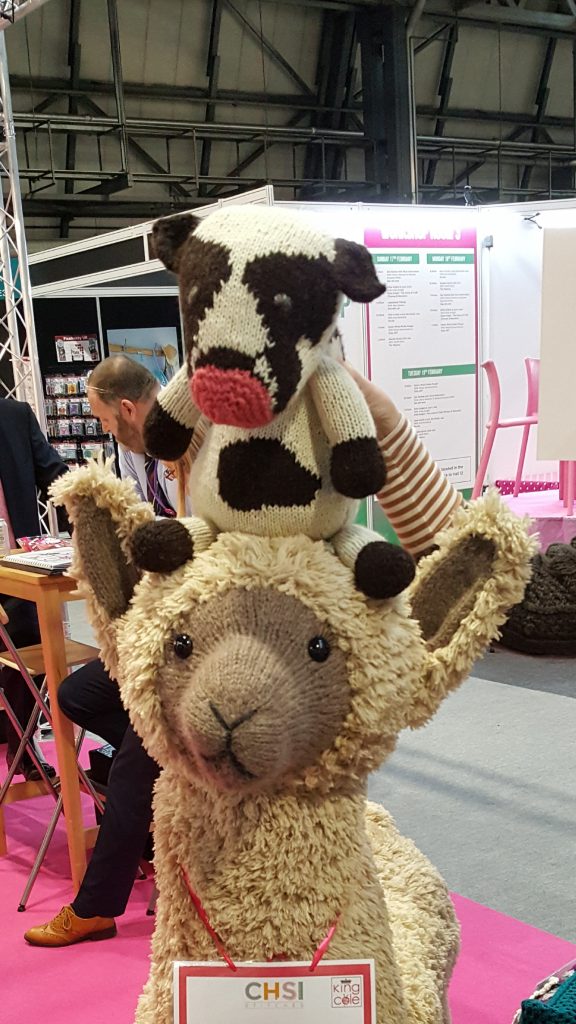 Before going, I didn’t know what to expect from this event, having never been to a B2B show. I found it much less busy than a B2C show like WonderWool Wales. However, the atmosphere was just as friendly – at the end of the day, both are filled with people interested in crafting, and everyone present at CHSI Stitches was passionate about what they had to sell, whether they were wholesalers or retailers.

I particularly enjoyed being able to squish and stroke all this lovely new yarn as a simple observer, with no pressure to buy. I just had to wait until theses yarns hit the shelves of the shop before I could actually own any of them, so I didn’t feel the (totally and ridiculously self-imposed) pressure and guilt that I remember feeling sometimes at a B2C show like WonderWool Wales. (The whole discussion about yarn-buying impulses, justifying yarn purchases and the difference between collecting yarn vs using yarn will be the topic of a different post!)

It was quite interesting to meet all the reps and it was also a great opportunity to get an insight into the buying strategies of a yarn shop. I had never given it much thought, but they have to take into account the season (there were no chunky or super chunky yarns because shops where buying what they would be selling over spring and summer so DK yarns and cottons where the stars of the show), but any upcoming big event (like WonderWool Wales).

I also discovered that it’s not a good idea for a yarn shop to sell exactly the same brands as the ones already sold in a nearby LYS, because it would be counterproductive – local yarn shops need to be united against big internet giants if they want to survive and thrive, so offering selections of different yarns than neighbouring shops is a good way of being complementary rather than competing.

So I encourage you to go and visit ALL your local yarn shops, as you may discover yarny goodness that you didn’t expect! There is even a Facebook group you can join to ask for recommendations of LYS near you or wherever you may be going on holiday (because yarn is the best holiday souvenir ever, right? – said the woman who came back from Iceland with 1.2kg of yarn in her suitcase…)