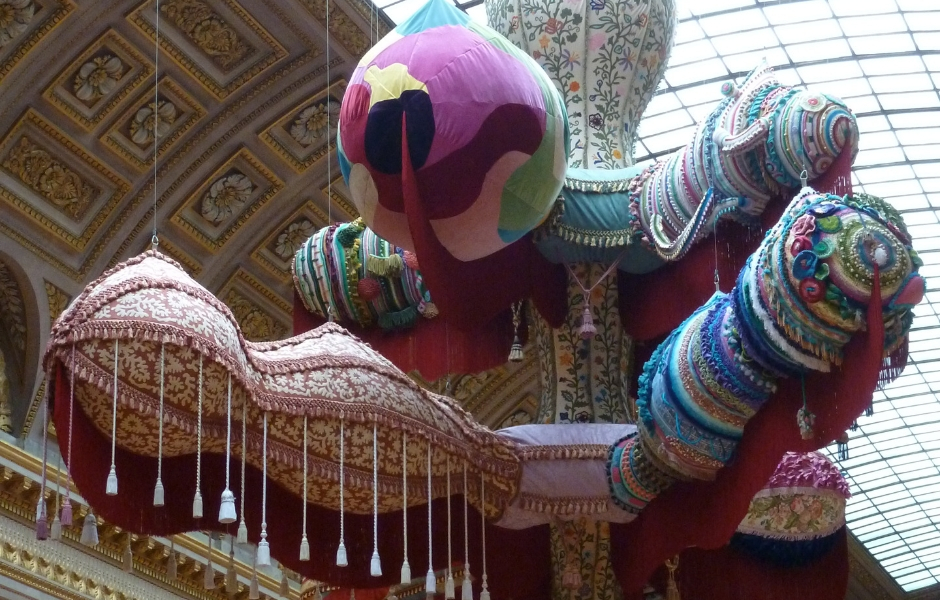 Today I wanted to talk to you about an artist who uses crochet a lot in her work: Joana Vasconcelos.

You may have heard of Joana Vasconcelos recently if you looked at the work exhibited at the Royal Academy of Arts earlier this summer. Royal Valkyrie was indeed the centrepiece in one of the exhibition rooms (as seen in this video, at about 3:40).

I discovered this French-born Portuguese artist back in 2012, when I went to visit the palace of Versailles with my aunt and my cousin. We didn’t know that there was an art exhibition running at the time and we had no idea what these enormous, weird, colourful shapes were doing in the opulent galleries of the former French royal residence. But you know what? They didn’t feel out of place at all! 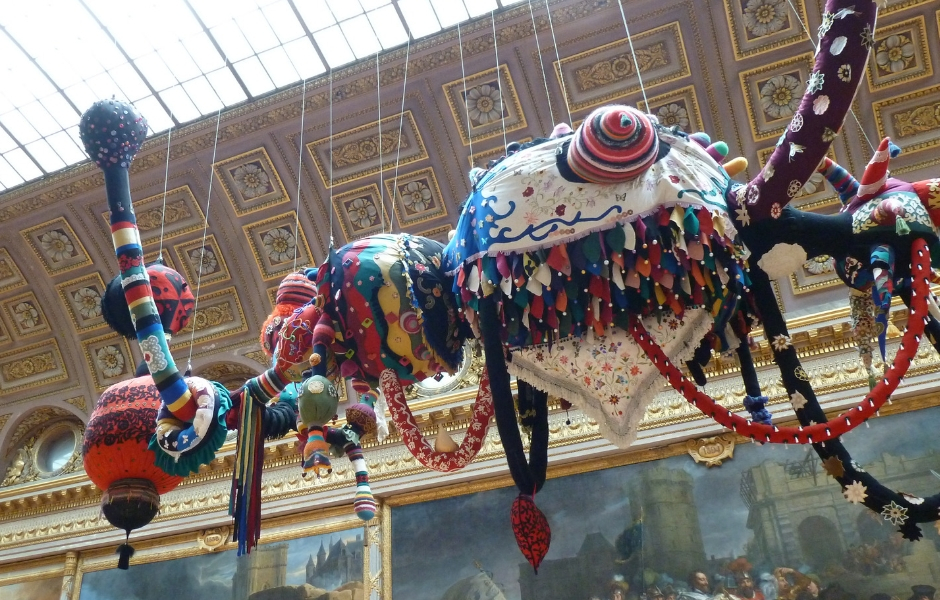 Everything in Versailles is very ornate, heavily gilded, too shiny, completely over the top (as you’d expect from a megalomaniac king!). Joana’s extravagant works shared some of the characteristics of the place, being so imposing, slightly overwhelming, making you want to exclaim “This is too much!” 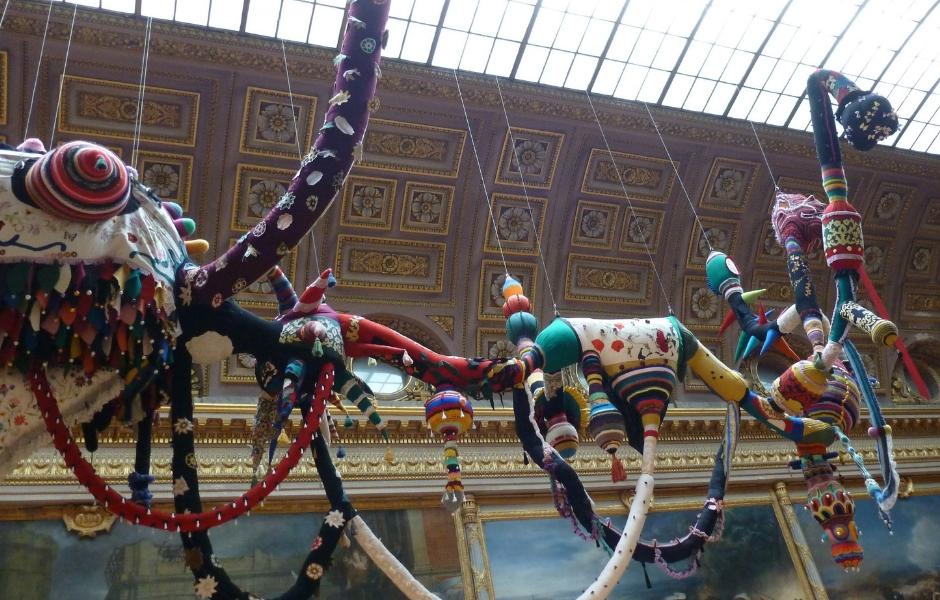 Surprisingly, all the “too-much-ness” of the venue and of Joana’s works sort of balanced each other out in a harmonious way. I have seen pictures of Joana’s monumental pieces exhibited elsewhere, and although it is not quite the same as seeing them with my own eyes in situ, I cannot think of a better place than Versailles to display them. After all, if a sensory overload is unavoidable, it might as well be due to yarn and fabric! 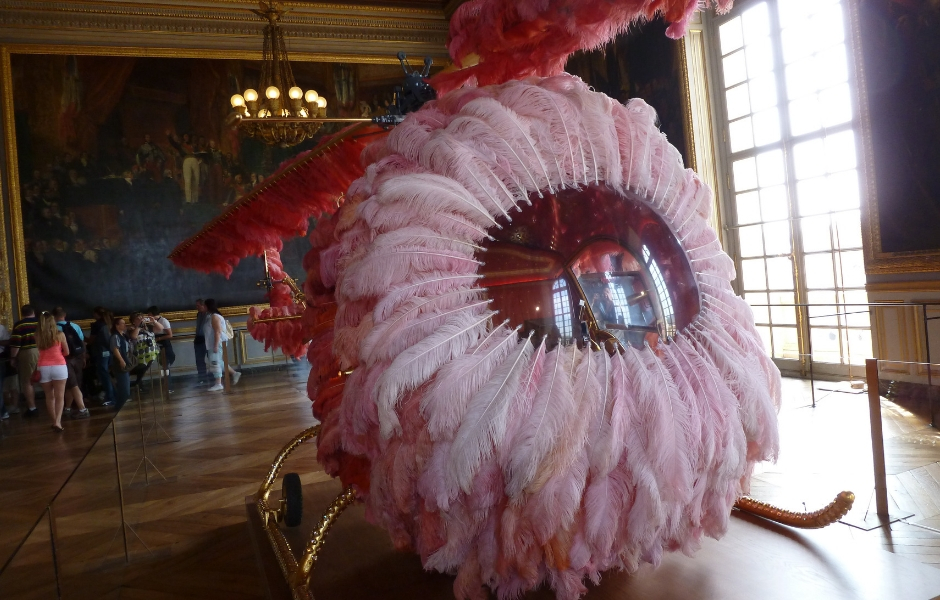 Not all of Joana’s work is crochet/knitting/fabric based. In keeping with the opulent and feminine theme running through the Versailles exhibition, I was lucky enough to see a few other pieces, like Lilicoptère and Black Independent Heart. 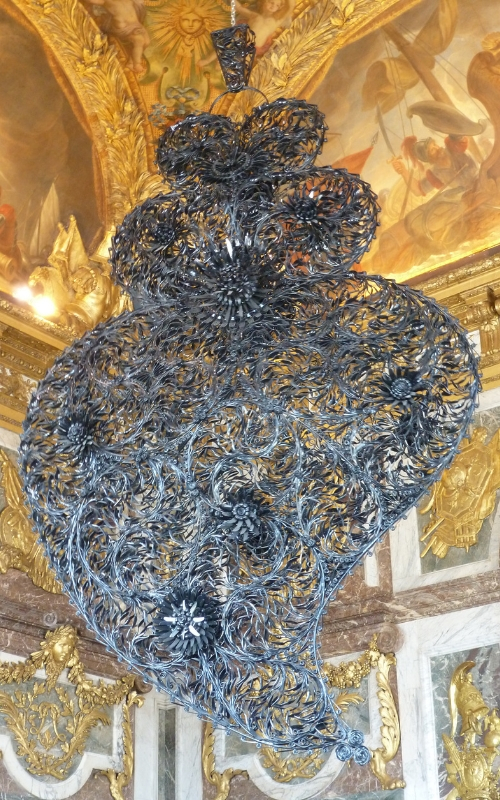 Some of Joana’s other crochet works are more subtle and toned down, like the Gardes, covered in monochrome, doily-like pieces of crochet. 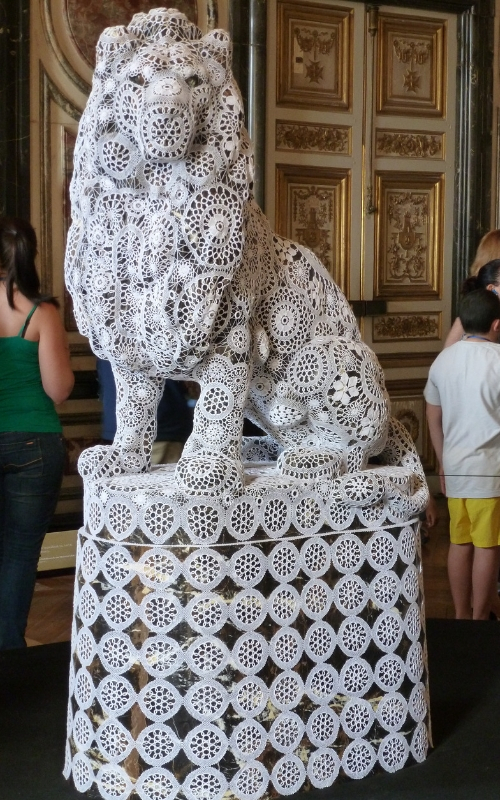 But you’d be wrong to believe that Joana only makes big, bold, cumbersome pieces. She used the same technique to cover many other animal sculptures (some of them much smaller than these marble lions). These pieces have a more traditional feel to them, and would probably appeal to a broader audience for purchasing and displaying in one’s home. But essentially… that’s a kind of yarn bombing, isn’t it? (I could, at this point, reopen the age-old debate about arts vs craft – but not today… maybe some other time!)

So, what do you think of Joana’s work? Let me know in the comments! And if you want to discover more of her joyous, intriguing and compelling pieces, you can have a look on her website.